A group of librarians from the Toronto Public Library is saying no to being forced to take the jab as a condition of employment. Other librarians across Canada are doing the same. And together with other workers they're participating in a country-wide walkout on Monday.
Rosemary Frei, MSc
October 22, 2021 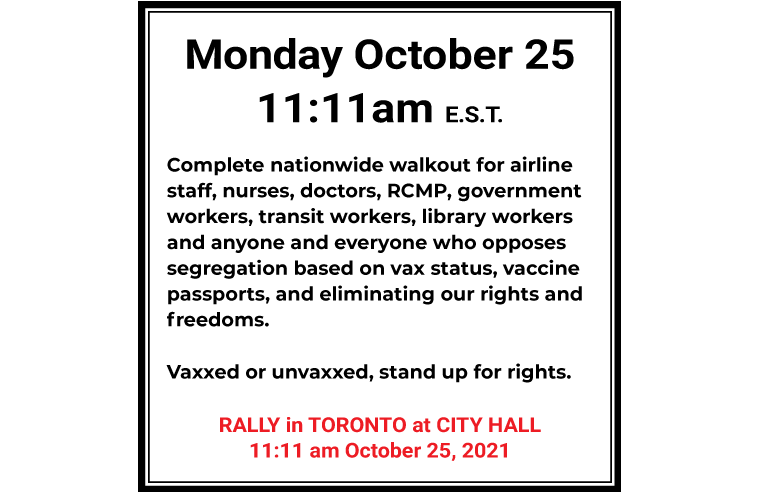 A group of librarians from the Toronto Public Library is saying no to being forced to take the jab as a condition of employment. Librarians elsewhere are doing the same.

Some of the Toronto Public Library (TPL) employees wrote an open letter standing against the library’s draconian Covid vaccination policy. The library’s directors posted the policy on the TPL website on August 19, stating it was effective as of Sept. 2. But it wasn’t easy to find. And it wasn’t until Sept. 2 [corrected Oct. 23 (previously had 'Sept. 22'] that the directors informed the employees about it via email.

The policy matches that of the City of Toronto. It requires all employees to have disclosed their vaccination status by September 20 and to be double-jabbed by October 30.

It was imposed despite extremely few library staff testing positive for Covid.

And instead of working with employees, the library has hired a high-priced law firm to punch back at anyone who challenges the policy.

Management is softening their language a little bit --  for example now saying disclosure of vaxx status is voluntary rather than mandatory. But they are poised to fire anyone who doesn’t comply. They’re also severely harassing anyone who resists.

They’re also not honouring employees’ medical or religious exemptions. And they don’t care if employees have had severe reactions to vaccines in the past, or they are pregnant and are about to go on maternity leave.

One person who was resisting the jab felt she had no choice and got it – only to end up in an emergency room with a heart condition. Her family doctor was afraid to write an exemption letter for her, but maybe her cardiologist will be brave enough to write one. It’s doubtful, though, whether the TPL will accept it.

As a direct consequence of all of this some librarians have become clinically suicidal.

Those unwilling to get the shots are continuing to talk and email with management to try to come to some compromise, but the deadline is looming. Their union also is not helping them.

In their open letter, the librarians who are pushing back called out the highly paid directors who “are now threatening, bullying and intimidating us with discipline, up to and including dismissal, for not disclosing our medical records and/or not choosing to be vaccinated against COVID-19.

“Hundreds, if not thousands of us, are now facing coercive policies that disregard foundational principles of library work, privacy and democracy,” they wrote.

In their open letter, they also point out that, “In 2019 the City Librarian Vickery Bowles made a public show of defending feminist Meghan Murphy’s right to free speech, but now will not respect the right to medical freedom and privacy of library workers.”

The letter explains that Bowles and the other directors have refused to answer “direct, specific questions related to the legality of their own COVID-19 vaccination policy.”

Those questions include, “Can you advise if any of the laws which protect an individual’s rights to privacy and medical confidentiality in Canada have been repealed?” and, “Are you claiming the TPL’s COVID-19 Vaccination policy nullifies an individual’s privacy under the [federal] Personal Information Protection and Electronic Documents Act, 2020 (PIPEDA)?”

They also ask about other major documents the policy contravenes such as Ontario’s Occupational Health and Safety Act and library workers’ contracts.

One of the librarians who is resisting told me in a telephone interview that, “We do not want to be seen as non-compliant or insubordinate or ignoring the policy or ignoring the mandatory training for those who don’t disclose their status. ... Instead we are asking questions, and ... that changes the power dynamics” and puts the burden of proof on the directors.

However, rather than responding to these questions, the directors have “dismissed, gaslit and completely ignored [the library workers],” the open letter points out. “[In addition,] our medical and religious exemptions that we were assured would be honoured have been denied, without cause.”

The open letter includes a call to action to the public: “If you love the library and what it should stand for, freedom, democracy, and the right to privacy, please consider making your voices heard and letting these directors know” via https://www.torontopubliclibrary.ca/contact/.

The letter ends by saying, “If you would like to reach out to the librarians and library workers who are being censored please contact us here: torontobodylibrary@gmail.com.”

Another librarian created the website ethicallibrarian.com to push back.

Yet others have initiated a petition against the policy - https://chng.it/XFp4rQ8fmF

And I’ve also heard from librarians elsewhere in Canada who similarly have been betrayed by their managers and unions.

“Being a librarian is a dream job,” one Toronto librarian told me. “I love doing programs for children, and helping them pick their next favourite book. ...

“My co-workers say, ‘You made a choice [to not get vaxxed].’ I say, ‘No. I’m living my life – and the library made a choice. I’m not planning to get fired based on not taking a medication.’ And the crazy thing is that six months ago my colleagues would have agreed with me that what’s happening is insane."

But they’ve succumbed to the constant stream of fear and pro-vaxx propaganda.

Let's all support the librarians and others standing up for their rights by participating in the cross-country walkout on Monday! Look online for information about the event in your area.
After obtaining an MSc in molecular biology from the Faculty of Medicine at the University of Calgary, Rosemary Frei became a freelance writer. For the next 22 years she was a medical writer and journalist. She pivoted again in early 2016 to full-time, independent activism and investigative journalism. Her website is RosemaryFrei.ca.