Pfizer's Paxlovid is being rolled out around the world. But in some ways it's even more experimental than the pharma company's Covid shot. For example, Health Canada -- which, like the US FDA, is a decades-long ally of the pharma industry -- admits that, "Not many people have taken Paxlovid. Serious and unexpected side effects may happen."
Rosemary Frei, MSc
January 26, 2022 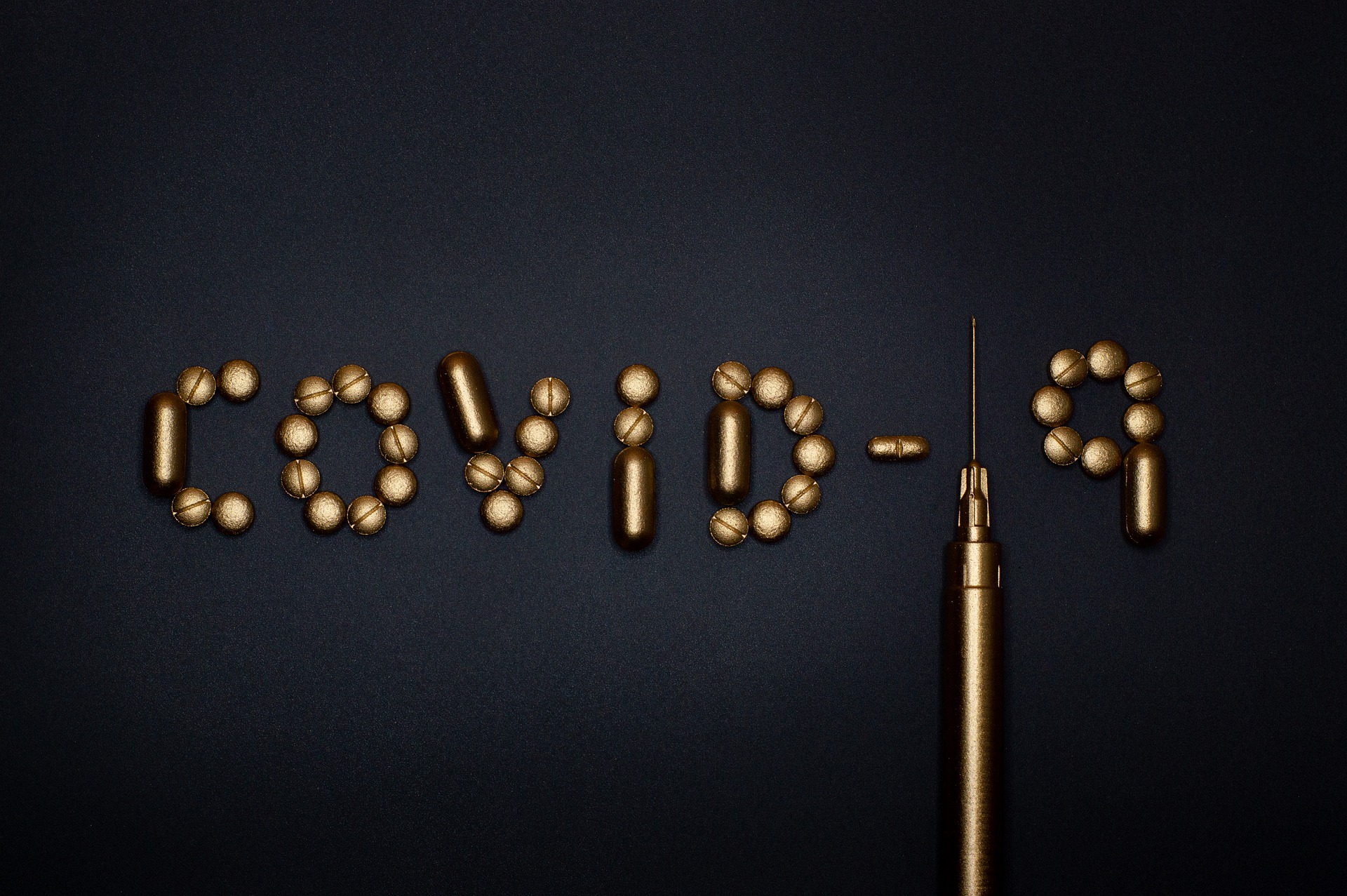 The gigantic truck convoys are rolling toward Ottawa, accompanied by wall-to-wall supporters and media coverage.

At the same time though, Pfizer’s Paxlovid is starting to be rolled out relatively quietly across North America, Europe, the U.K. and beyond.

It’s a set of pills for Covid - and it's the second part of a one-two punch that started with the company’s  mRNA Covid shot.

Together, they’re powering Pfizer to dizzying levels of profit and market capitalization.

But there’s little if any ‘pax’ (the Latin word for peace) likely to come from these pills.

Paxlovid has been tested on very few people so far. It's not being studied at all on vaccinated people or those who've had Covid. The pills negatively interact with many very widely used medications. Plus of course the studies are being manipulated to produce seemingly good results.

I’ve heard that behind the scenes some regulatory-agency employees are sick and tired of yielding to intense pressure from politicians, public-health officials and Big Pharma. They don't want members of the public to take this extremely poorly studied and potentially very dangerous set of pills.

Each dose of Paxlovid consists of one pill of ritonavir -- a repurposed old HIV drug -- and two pills of a new drug named nirmatrelvir. Both of these drugs are protease inhibitors.

This nirmatrelvir/ritonavir combo was authorized for use in the U.S. by the Food and Drug Administration under an Emergency Use Authorization (EUA) on Dec. 22, 2021, and for use in Canada by Health Canada on Jan. 17, 2022.

It’s allowed in youth -- 12 years of age and older -- and adults in the U.S., Israel and South Korea. In other countries including the U.K. and Canada it's authorized for people 18 years old and above.

(Note that authorization isn’t approval; it’s very rapid evaluation followed by the nod to let tens of millions of people take it, because supposedly we’re in an unprecedented public-health crisis akin to a war.)

Also, a test in a petri dish by Pfizer scientists showed it may have some effect on Omicron -- see the first paragraph on page 36 of the Canadian Jan. 22 spec sheet (AKA product monograph) on it. Based on this very thin evidence, mainstream media are widely reporting that “the pills are expected to be effective against Omicron.”

The nirmatrelvir/ritonavir pills are being authorized for use by people who test positive for Covid, have mild or moderate symptoms and are deemed to be ‘at high risk for progression to severe COVID-19.’

But how does Pfizer define high risk?

Being 60 years of age or older. Or overweight. Or having high blood pressure. Or a number of other things – including having “other conditions or factors (i.e., race or ethnicity) that may place patients at high risk for progression.” (See page 8 of the Canadian Jan. 22 spec sheet.)

Another alarming fact is that the U.S. and Canadian decisions to authorize nirmatrelvir/ritonavir were based only on interim analyses of an ongoing study. This trial started on Aug. 25, 2021, and is scheduled to finish on about April 24, 2022.

In total only approximately 1,000 people had been randomized to receive nirmatrelvir/ritonavir at the time U.S. and Canadian authorities gave it the thumbs up.

(It’s very hard to decipher what the specific numbers are – both the Nov. 5, 2021, Pfizer news release describing the interim analysis examined by the FDA and the Jan. 17, 2022, Canadian product monograph -- which has an interim analysis from a slightly later date -- have a range of numbers, as well as several types of data analyses.)

Plus, even those interim results were manipulated to the max in the study write-up (more on this below) – which in the case of the U.S. was simply a Nov. 5, 2021, Pfizer news release. 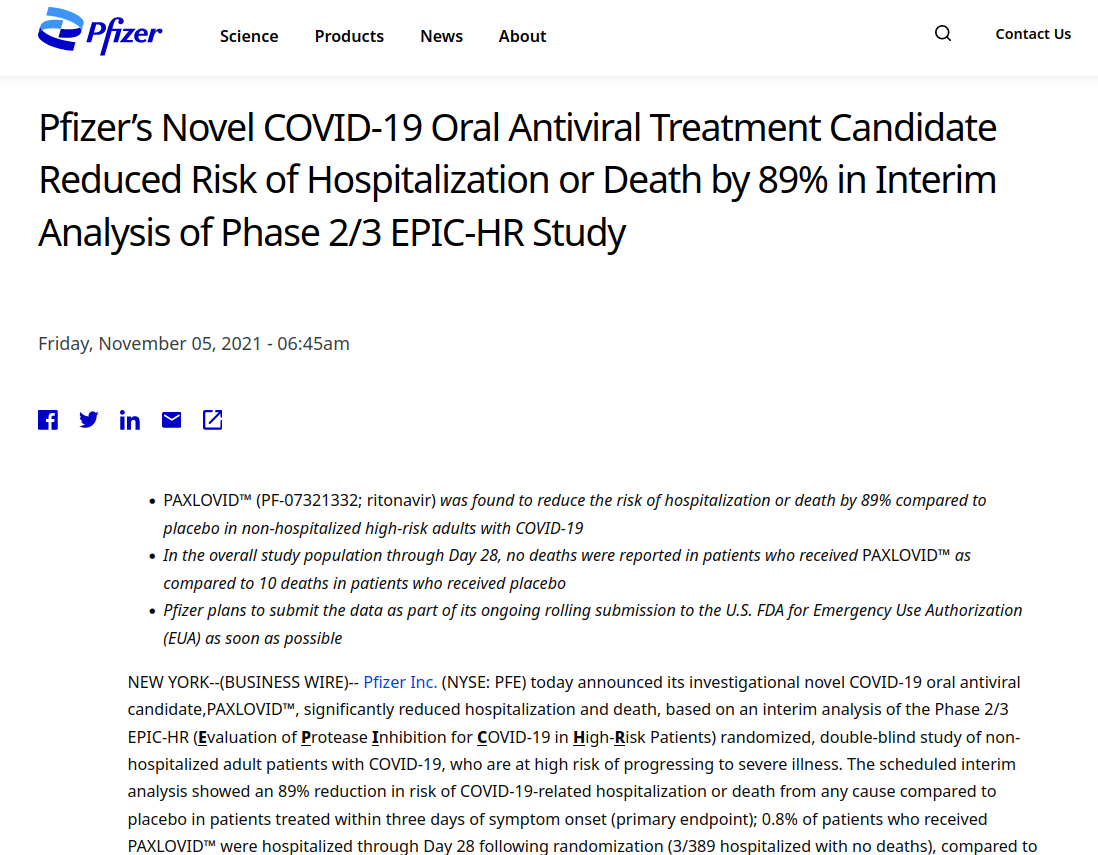 And Pfizer didn’t even make public the original data it supplied to Health Canada, as far as I can determine. Furthermore, the company’s Jan. 17, 2022, news release announcing the authorization in Canada had very few details.

It was all very predictable.

That’s obvious from the fact that more than a month before the FDA authorization -- on Nov. 18, 2021 -- the U.S. government signed a $5.3-billion deal for 10 million courses of nirmatrelvir/ritonavir (i.e., $530 U.S. per course), pending FDA authorization.

Ditto in Canada: on Dec. 3, 2021, the Canadian government announced its pledge to buy an initial one million courses of nirmatrelvir/ritonavir from Pfizer, pending Health Canada authorization. That is worth about $690 million (Canadian dollars) when you do the math based on $530 U.S. per course and the exchange rate of 1.3.  (A ‘course’ means the total number of doses needed to complete a treatment regimen.)

(The same announcement said the Canadian government also had signed an agreement with Merck to buy 500,000 courses of Merck's Covid pill molnupiravir -- with options for buying 500,000 more courses -- also pending Health Canada authorization.)(Molnupiravir was authorized by the U.S. FDA a short time later, on Dec. 23, 2021, despite significant concerns. Those include its low effectiveness, high toxicity and potential for women who take it during pregnancy to give birth to children with birth defects. The FDA authorized Merck to sell it for people aged 18 or over with mild to moderate Covid who test positive and are at ‘high risk’ of developing severe Covid. Health Canada has not yet given it the nod. And media report that other countries also are getting cold feet about it.)

It also isn’t being tested at all in pregnant or breastfeeding women.

Pfizer states on page 12 of the product monograph that Paxlovid “should not be used in pregnant women unless the potential benefits outweigh the potential risks to the fetus.”

But there's no such warning for the use of nirmatrelvir/ritonavir by breastfeeding women.

As I noted earlier in this article, each dose of Paxlovid consists of two tablets of nirmaltrelvir and one tablet of ritonavir. Each set of three pills is to be taken twice a day for five days, starting within five days of symptom onset.

Ritonavir has been used since 1996 in people who test positive for HIV. It is widely known to cause serious, life-threatening conditions such as pancreatitis, heart-rhythm problems, liver problems, severe skin rash and allergic reactions.

Instead, they’re putting on the front lines the frail, the elderly, and/or those who live in poverty or are otherwise disadvantaged.

For example, a Jan. 25 CBC News article reports that Canada’s deputy chief public health officer, Howard Njoo, recommends the first to receive the pills should be “people who are immunocompromised, 80 years of age and over, or [those] who may not have access to health care because of geographical or socioeconomic concerns[,] are first in line -- regardless of vaccination status.” [Bolding added by me.]

Quebec is one of the first places poised to start using it in these vulnerable people. By March they’re expecting to receive enough of the pills to treat more than 25,000 people. That includes those with “serious conditions who cannot be vaccinated.” After that, they’ll open up the queue to others.

Therefore, it appears politicians, government officials and Pfizer are stoking demand using the same playbook as they did with vaccines.

And the mainstream media are helping to hype it. For example one CBC report alone -- by Montreal journalist Verity Stevenson on Jan. 18 -- called it a “sought-after” drug that has been “lauded for its potential to reduce hospitalizations from the virus” via Pfizer’s reporting “that Paxlovid reduced the risk of hospitalization or death by an impressive 89 per cent compared with a placebo.”

And here’s another example of the overall very positive coverage; it's in the Toronto Star today. 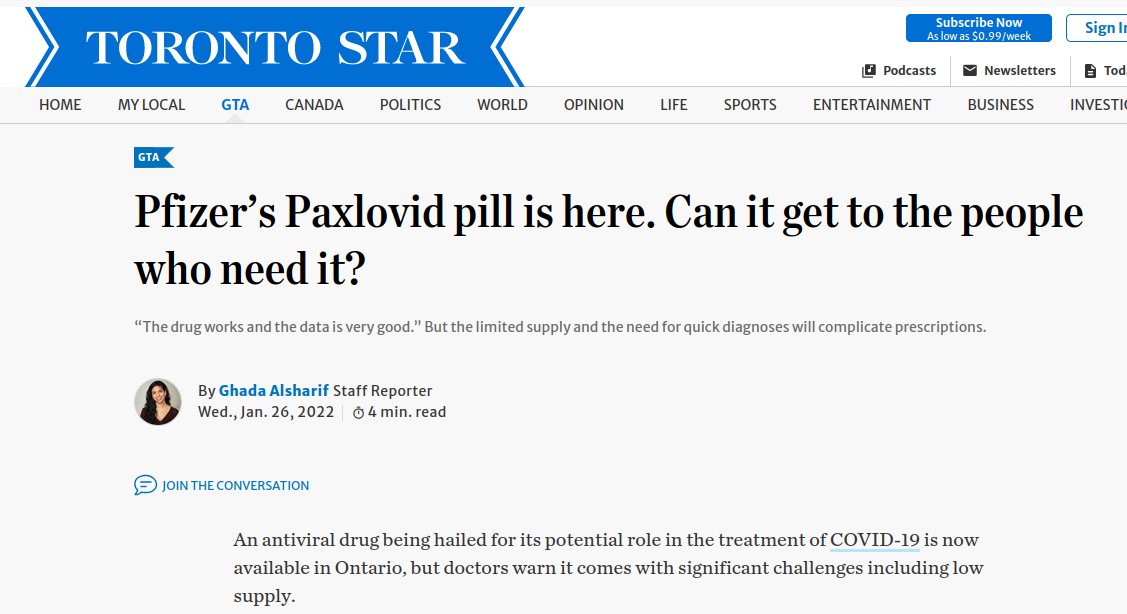 A Jan. 25, 2022, National Post article is somewhat of an exception: the author, Tom Blackwell, flags the problem of Paxlovid interfering with the effects of other medications (more on this below). However, he doesn't mention most of the other major drawbacks of the pills.

Yet even the Canadian federal government admits, on its web page for the general public on the pill, that “Not many people have taken Paxlovid. Serious and unexpected side effects may happen. Paxlovid is still being studied, so it is possible that all the side effects are not known at this time.” [Bolding added by me.] 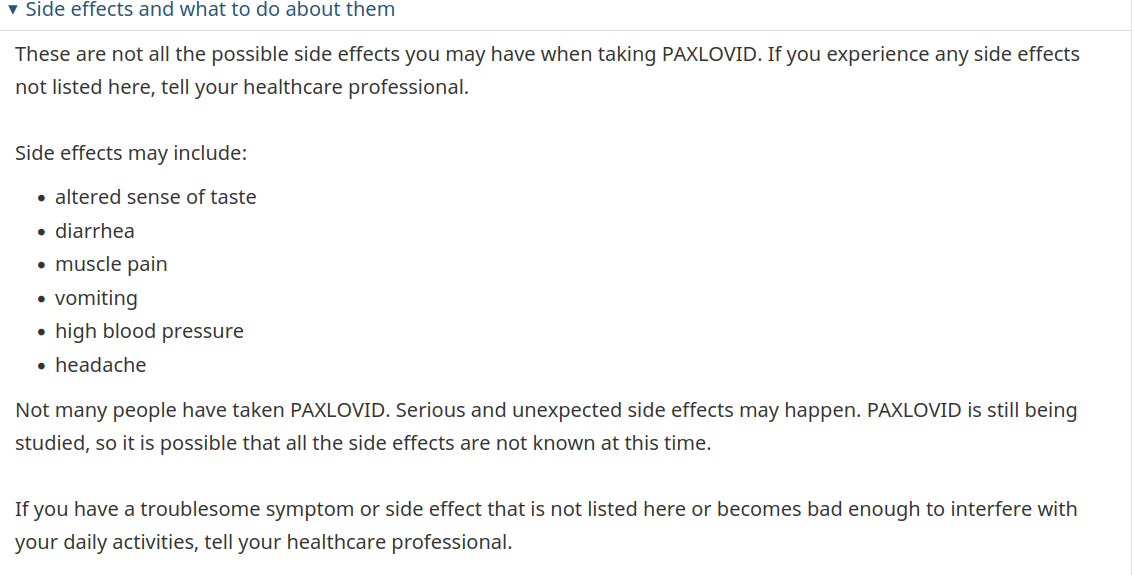 Further down on that same page, it says people should report any suspected side effects directly to Health Canada.

Unfortunately, however, we know from the vast under-reporting of serious effects and deaths from, for example, the Covid jabs, that it’s highly unlikely the feds will faithfully tally and publicly display all such reports.

For its part, the FDA asked Pfizer to report to it the “serious adverse events and all medication errors associated with the use of Paxlovid,” as part of the EUA. It also stipulated that healthcare facilities and healthcare providers receiving Paxlovid will track and report serious adverse events and medication errors. However, this also is very unlikely to result in a full and honest public reporting.

(The FDA also asked the company to provide the FDA with further trial results relating to safety and effectiveness until the study concludes in April.)

So they’re not even trying to pretend that it’s been shown to be safe and effective.

After all, this is the pharmacocene epoch of our planet’s history.

Here are three more red flags among the many surrounding Paxlovid:

That panel is called the Antimicrobial Drugs Advisory Committee. Members of the panel scrutinize pharma companies' data on drugs the firms are seeking approval of. The panel's meetings are public and are attended by media and others.

I found this out when I stumbled on a Jan. 6, 2022, SonsOfLibertyMedia.com article on Paxlovid. The article describes, among many other insightful information, a Dec. 22, 2021, Bloomberg Law article on the controversy caused by the FDA skipping this important step.

The panel meeting usually is just a rubber stamp, but nonetheless skipping it is very unusual.

Since ritonavir (and by extension Paxlovid) reduces CYP3A4’s activity, that means those large number of drugs and toxins will stay in the body longer.

The Canadian federal-government website on Paxlovid admits that “many medicines interact with Paxlovid. Taking Paxlovid with these medicines may cause serious or life-threatening side effects.” [Bolding added by me.]

In total, there are more than 100 medications that Pfizer says shouldn’t be taken with Paxlovid. They include very widely used ones like lidocaine, warfarin, phenobarbital, erythromycin, St. John’s wort, fentanyl, methadone, midazolam and prednisone.

If you look up what ‘intent-to-treat’ means, you’ll see it’s based on assuming that study subjects received the treatment, whether they in fact did or not. Many articles on this approach profess it to be solid. But objectively it is not at all. (I started to notice intent-to-treat analyses in medical research studies at least 20 years ago. It was -- and still is, to my knowledge -- a popular way to avoid honest reporting of the effects and efficacy of drugs being tested.)

And just to be clear, the Pfizer news-release study didn’t stop there – its intent-to-treat analyses use a ‘modified’ approach. Specifically they include, for example, people “who at baseline did not receive nor were expected to received COVID-19 therapeutic mAb [monoclonal antibody] treatment.”’

You can’t make this stuff up.

I sincerely hope that the employees who, behind the scenes, are pushing back against the pressure to let Paxlovid be given to many people, will win the day.