Robert Malone: An Enigma Wrapped in Many Unanswered Questions

The prominent Covid-vaccine sceptic has taken two doses of the Moderna vaccine. And that's just one of many inconsistencies between his words to the Covid-sceptic crowd and his actions.
Miriam Walton and Alan Goater
July 18, 2022 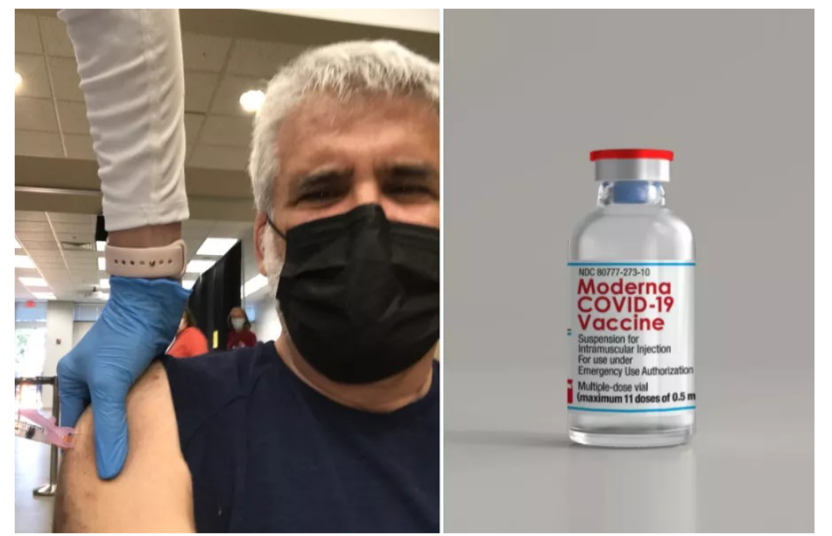 This is a guest post by Miriam Walton and Alan Goater in Derbyshire, U.K. Over the last year they’ve been closely following interviews and articles by and about Robert Malone. And that’s left them with more questions than answers.

Below is Walton and Goater’s email to Malone in February 2022 with questions about information in the public domain about Malone. (I’ve added hyperlinks to the source material, photos from that source material and, in square brackets, some clarification/comments.)

From the Pennine foothills of the UK we have followed with interest your public and media appearances in connection with your opposition to current US (and global) public health policies, in particular the controversies which have arisen concerning possible misinterpretations of your position. We have it in mind to write (and possibly publish) about these issues and would be very grateful for some clarifications from you in the interests of fairness and accuracy to all parties. Please find our questions below.

We appreciate that you must be exceedingly busy at this time but would hope that you could respond within, say, 7 days.

1. You are on record as saying that you had two doses of the Moderna Covid vaccine some months after being infected with the disease because a) you had heard rumours that your long-haul symptoms might be helped by the vaccine and b) you wanted (needed?) to travel abroad.

2. There exists online footage of professor Mattias Desmet asking you not to use the word 'psychosis' in connection with his theory of mass formation. ['online footage' refers to this interview of Malone and Desmet on Tommy’s Podcast; in it, Malone starts speaking at 4:33 and at 15:25 Desmet finally gets a chance to correct Malone by saying his theory is termed mass formation, not mass psychosis.]

You said, on the same occasion, that you had come to “sit at the feet of the master” (Desmet) and to learn from him.

However, you have been speaking and writing about 'mass formation psychosis' since then, including on your own Substack (i.e., your reformulation of Desmet’s mass formation with reference to Dr. Mark McDonald’s work on ‘mass delusional psychosis’ – a different phenomenon).

3. You are on record as identifying both Michael Callahan and Daryl Galloway as CIA agents. [For example starting at 1:00:07 in this video interview of Malone in which he talks about outing Callahan.]

4. [Background to this point: 1. Malone being actively involved currently or in the recent past in the development of a Covid jab called RelCoVax made by India-based Reliance Life Sciences; and 2. a Substack article by a member of an organization called ‘Health Freedom for Humanity;’ the article apparently points out that Malone in his Dec. 2021 interview by Joe Rogan didn’t mention this vaxx or his involvement with it, and also posed other questions such as whether there is graphene oxide in the vaxx. (We couldn’t find the article online; the information about the article in the question below comes from Malone’s Jan. 26, 2022, Substack post about it.)] 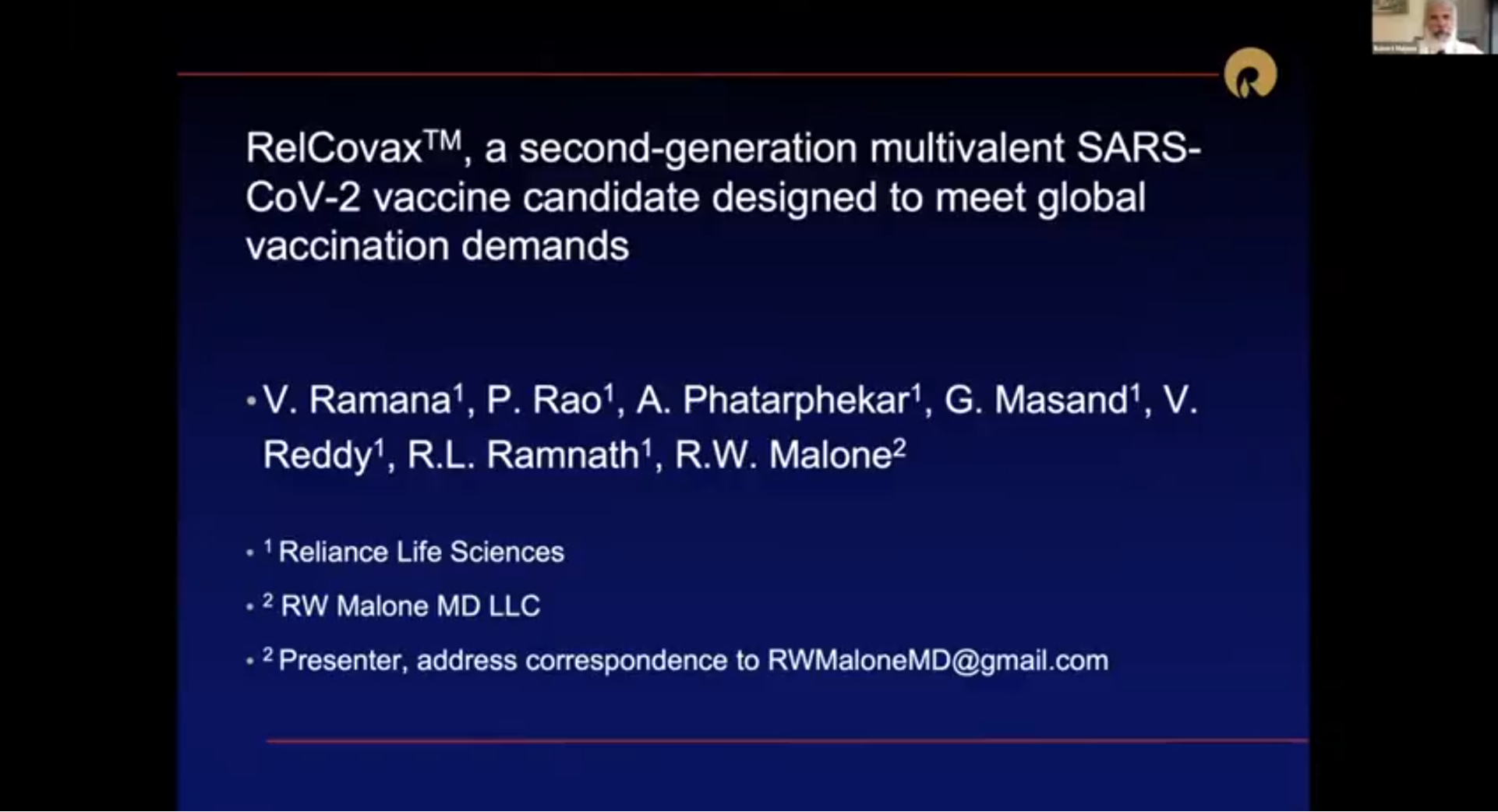 In your recent robust dismissal of criticism from the 'Health Freedom for Humanity' organisation you answered in respect of Statement #2 - “it [RelCovax] allegedly has Darpa (graphene oxide) Hydrogel in it” in the following terms:

"Hydrogel, and other alum-based adjuvants, are among the best characterized of the traditional adjuvants. DARPA had nothing to do with developing Alum or Alhydrogel adjuvants. Alhydrogel has nothing to do with Graphene Oxide. This “Relcovax” vaccine product using Alum + CpG for its adjuvant system. The vaccine candidate is designed to be a very low cost, traditional alternative to the genetic vaccines, and employs much more traditional methods than, say, the Novavax product." [Bolding in the original.]

5. During your Lincoln Memorial speech on January 22, 2022, you said "Now we have Omicron. These vaccines were designed for the Original Wuhan strain, a different virus." [At 4:35 in this video of Malone’s speech]

6. During that same [Jan. 22, 2022] speech you asserted twice, in support of your not wanting to see them used on children, that the genetic vaccines are not 'completely safe,’ [At 4:19 and 5:37 in this video of Malone’s speech (the same video cited in point 5 above).]

7. On 12 February 2020 you and your wife's book, 'The Novel Coronavirus' was published. The synopsis refers to the 'coming epidemic'. [It appears to now be impossible to find a copy of the book. Therefore the hyperlink and mention is to a synopsis.]

Screenshot of the synopsis of The Novel Coronavirus 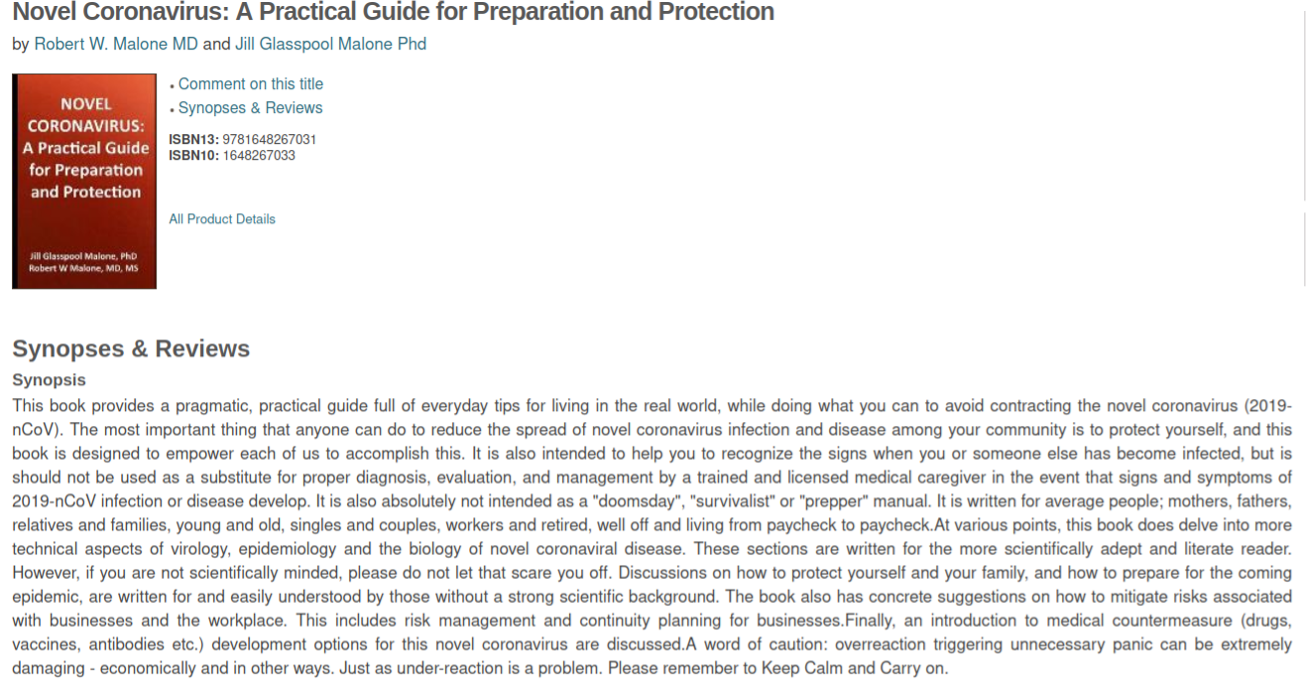 [Miriam and Alan wish they’d also asked Malone how he and his wife knew in advance that the World Health Organization would name the virus ‘COVID-19.’ See for example this abstract of the book posted on researchgate.net – it shows the table of contents, with the second chapter titled, ‘Epidemiology of COVID-19’ and the second-last titled, ‘Clinical Characteristics and Medical Countermeasures for COVID-19.’]

8. You are on record advocating for continuing/increasing testing for SARS-COV-2 and for these to be self-administered. [Malone does this in many places – as just one example, at 1:13:35 in this interview.]

9. You have advocated 'active surveillance' and 'tracing' as appropriate countermeasures to Covid-19 (along with self-testing).

10. You are on record advocating the use of the vaccines on the elderly/vulnerable. [See for example this interview (the same article is cited in point 9 above.] You are also (famously!) on record deploring their use on children because of the known, and unknown, dangers. [He has done so many times, such as in this video of his Jan. 22, 2022, Lincoln Memorial speech (which was also linked to in points 5 and 6 above).]

11. All expert opinion at the outset of the public-health emergency agreed that respiratory-disease pandemics, epidemics and outbreaks end in 18-24 months. [See for example the CDC web page titled ‘Past Pandemiccs' and note that none of the highlighted outbreaks lasted longer than two years.]

12. Your knowledge, credentials and experience are second to none in the field of public health. Your reputation is well established in the US and internationally.