I exposed Geert Vanden Bossche’s disinformation campaign in a March 16, 2021, article. Unfortunately, he continues to fear-monger, with the active support of high-profile leaders in the Covid-sceptic community.
Rosemary Frei, MSc
October 24, 2021 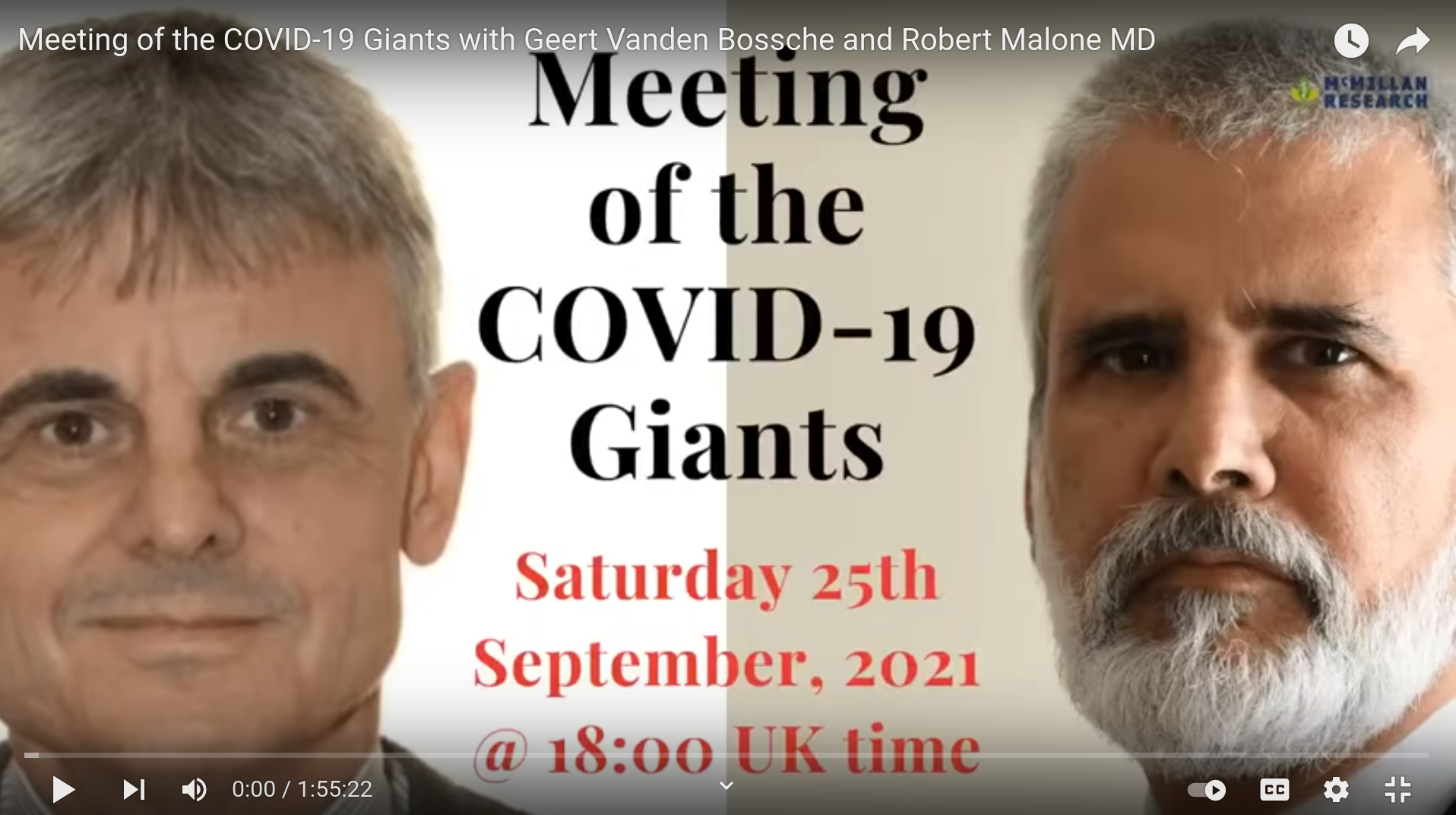 Unfortunately, he continues to fear-monger, with the active support of high-profile leaders in the Covid-sceptic community.

One of the latest examples is the September 25 interview in which he teamed up with Robert Malone.

They sound confident as they give their acronym-laced assertions -- with zero solid citations to back up them up. In addition, the interviewer Philip McMillan asks only softball questions to these “Covid-19 giants.”

Here are just five of the large dollops of disinformation the pair dish out in the interview:

This was one of the points I made in my March 16 article (in Point 4).

I’ve subsequently looked at all 20 of the ‘Natural and vaccine-induced immune escape’ references on the ‘supportive references from the literature’ page on Vanden Bossche’s website. Each of those 20 references is either hidden behind a paywall (such as the first and 17th ones) or not checked for accuracy via processes such as peer review. And all 20 are 1) in vitro (literally, ‘in glass’ - that is, is an artificial environment such as a test tube or petri dish), 2) mathematical models and/or 3) completely theoretical in other ways.

The same goes for Vanden Bossche’s Oct. 17 article, in which he doesn’t have any solid evidence to back his contention that the booster shots will produce a “spectacular surge of morbidity and mortality rates in the population” have the same fatal flaws. (More about Israel in Point 4 below.)

In fact, as far as I know there hasn’t been a single objectively accurate report published in a journal showing that even one person (vaxxed or unvaxxed) who was diagnosed with Covid became seriously ill or died as a result of immune escape.

(There also is a great deal of doubt about whether the large numbers of hospitalizations or deaths from Covid [including those in the studies Vanden Bossche cites] in fact truly were due to Covid.)

Furthermore, in their Sept. 26 interview Vanden Bossche and Malone make no mention of the other phenomenon that could occur if, as they claim, the novel coronavirus has a high mutation rate. That is, the virus vanishing because the mutations in it cause it to cease to be able to function. This phenomenon is also known as ‘viral extinction’ and has frequently been observed throughout history, as infectious diseases run their course and disappear.

The pair also give very short shrift to natural, long-lasting immunity. Vanden Bossche also minimized its role in his original March interview and in virtually all his other interviews and articles. I brought this up in Point 5 in my March 16 article. The fact is that billions of people have developed natural immunity to pathogens over the millennia by being exposed to those pathogens as infants. The very great majority of people aren’t killed by those pathogens despite the pathogens continuously mutating in the face of pressures from vaccines - for example the influenza virus with respect to the flu vaccines -- and from other factors.

Some of the other reasons that viral escape is only a remote possibility are covered by Mike Yeadon and Marc Girardot in their March 11, 2021 article. They note, for example, that there are a large number of protein sequences (also known as ‘epitopes’) in any given foreign substance that are recognized by the body. Those in turn lead to the production of antibodies and T-cells specific to each of those epitopes. This diversity means it is highly unlikely that there will be so many changes to the epitopes that the antibodies and T-cells and other immune-system components will no longer be able bind to and inactivate all of them.

And in fact they give no evidence that the ‘new variants’ are more transmissible. And as far as I’ve been able to determine that’s because no solid evidence exists -- or even that the new variants exist. For example I documented this in my Feb. 3, 2021, article-and-video combo titled, ‘Is it True that the New Variants are Very Dangerous?’ and in my May 24, 2021, ‘Three Tips for Checking Whether a Medical Paper is Legit or Bullsh-t’ (in Tip Two, on two of the main papers used to ‘prove’ that the Delta variant is highly transmissible and therefore very deadly; one of these papers was purely in vitro, and the other was in 18 hamsters and the researchers didn’t even attempt to show the hamsters transmitted the virus from one to another).

While I’m at it, also note that former Ontario Science Table member David Fisman and epidemiologist and mathematical modeller Ashleigh Tuite – both of whom work at the Dalla Lana School of Public Health at the University of Toronto -- wrote a paper on the Delta variant published October 4, 2021 in the Canadian Medical Association Journal. They claim Delta is very dangerous. However, if you look at the paper’s ‘Methods’ section, you’ll see how flimsy it is.

One of the primary red flags is that Fisman and Tuite used theoretical models rather than direct clinical data (the first sentence of the ‘Statistical analysis’ subsection says they “constructed mixed-effect logistic regression models”). See my article ‘The Modelling Paper Mafiosi’ on examples of how modelling produces false and fear-mongering information.

Furthermore, the ‘unvaccinated’ group included not just the unvaxxed but also everyone in the study population who had received one dose (see the last sentence of the ‘Study population’ subsection).

And Fisman and Tuite arrived at the confidence intervals -- which quantify the amount of uncertainty around data produced by a study -- using a highly unusual and tortuous method called ‘parametric bootstrapping.’ This differs significantly from the standard method for calculating confidence intervals (see the ‘Statistical analysis’ subsection).

They don’t mention that the peaks could actually be the large number of injuries and deaths from the vaccines -- via allergic reactions, blood clots, myocarditis, etcetera. This phenomenon has been seen in many countries, but ignored by the mainstream. (And another contributing factor to the peaks could be a large number of false positives from, for example, the highly inaccurate PCR test -- or simply bogus reporting from health officials as has occurred around the world for the last 18 months.)

That in turn could explain the shift to higher rates of sickness and death in young people that Vanden Bossche and Malone predict and that may well happen. After all, countries’ focus is now shifting to vaccinating children and that, tragically, will cause large numbers of injuries and deaths among them.

Among the many head-scratcher statements Malone and Navarro make in that op-ed is that the Covid shots are “good at preventing severe disease and death.” They also say that the Delta variant is “highly contagious,” that the vaxxes’ serious adverse events are “rare” and that the short window of vaccine efficacy is “most alarming and perplexing.”

Their overall message is that mass vaccination should be halted and that instead be replaced by “individual vaccine choice” and the use of other agents ranging from the combination of high-dose famotidine and celecoxib to zinc supplementation.

So please try to not accept at face value the statements of Vanden Bossche, Malone, or anyone else. Because as in any other arena in which a great deal is at stake, due diligence/fact-checking is required. And of course never forget to follow the money.