Voting With His Feet

BillboardChris is spreading the word about the danger of gender ideology from coast to coast and also endorsing the People’s Party of Canada in the upcoming election.

Reposted on SOTT.net here and on Truth Comes To Light here. 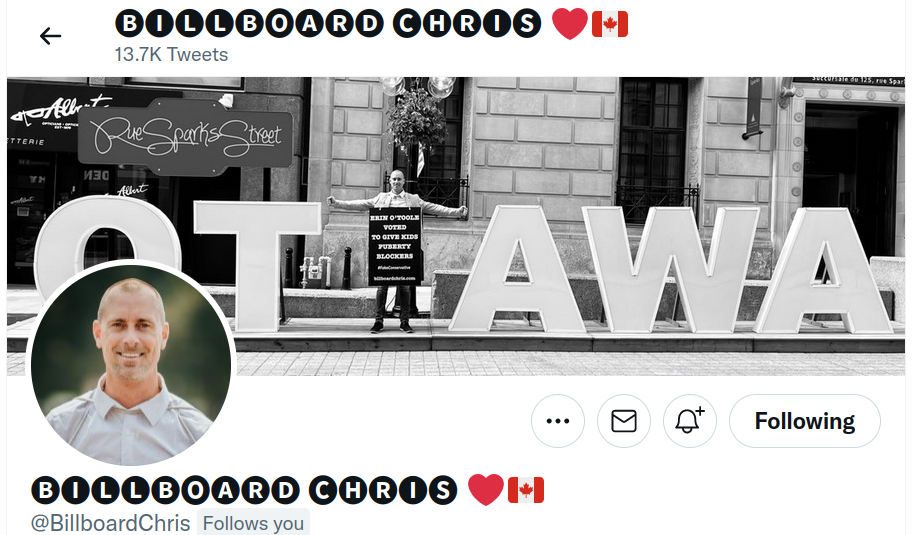 Chris Elston - AKA Billboard Chris – is on a mission.

The southern-B.C. resident recently toured Eastern Canada. Wherever he landed, he brandished his billboard that has messages about the dangers of medical transition. That led to dozens of conversations a day between Elston and passers-by about the gender-ideology indoctrination that’s manipulating millions of kids in Canada alone into believing medicalizing puberty is praiseworthy.

Elston is driven by the conviction that it’s his duty as a man and as the father of two daughters to be on the front line defending girls from harm.

And indeed it’s a gladitorial arena: his left arm was broken in Montreal in March when social-justice warriors swarmed him and one pummeled him with a large traffic cone. (Elston needed surgery to mend the break; the scar is still prominent on his arm.)

“The truth is, a broken bone is nothing compared to what our kids are going through,” he told one of the many reporters who interviewed him after that assault.

What Elston is referring to is the unprecedented jump in number of young people, disproportionately females, who are being diagnosed with gender dysphoria. Gender dysphoria is defined as a mismatch between one’s psychological sense of one’s gender on the one hand and one’s biological sex on the other.

Therefore most of these girls are put on puberty blockers; usually leuprolide, which is marketed using the brand name Lupron by its manufacturer, the pharma giant Abbvie. Puberty blockers are now used routinely -- despite not being approved by regulatory authorities for halting puberty (which means the use of Lupron to do this is ‘off-label’). And its safety and efficacy have not been studied very much.

Almost all these girls then go on to take high daily doses of testosterone, which in medical-speak is a ‘cross-sex hormone’ (boys who are medically transitioning take estrogen). Testosterone has not been approved for treating gender dysphoria – nor have most other drugs used by people who are medically transitioning. And its short-term and long-term effects have not been fully evaluated.

Many of these girls then voluntarily get their breasts amputated via double mastectomies. In trans parlance this is ‘masculinizing gender-affirming surgery’ or ‘top surgery.’

These legions of young women have been convinced by friends, popular culture, mainstream media, social media, advocacy groups and teachers – starting as early as pre-kindergarten – that being trans is where it’s at. It’s cool to undergo voluntary procedures like having their healthy breasts removed.

After all, being an adolescent girl can feel unbearable; being a boy is easier. Therefore it’s considered of critical importance to ‘affirm’ many young females as actually being males who were ‘born in the wrong body.’ The same goes for boys who believe they are girls.

However, those organizations and other purveyors of gender ideology minimize the many huge harms that medical transitioning often confers. To name just a few, there’s stymied physical and cognitive development, increased anxiety and depression, significantly elevated risk of cardiovascular diseases (particularly in females), painful intercourse due to vaginal atrophy, sterility and, in the case of women, also being unable to breastfeed. Both males and females who medically transition have to undergo procedures to provide them with any hope of having a child.

Thousands of boys also are falling prey to this craze.

Radical gender activism is permanently damaging youths’ bodies and minds. It’s also tearing apart inter-generational bonds. And as if that isn’t enough, it’s hijacking women athletes’ opportunities to compete on an even playing field; this is well-documented in Linda Blade’s book Unsporting: How Trans Activism and Science Denial are Destroying Sport.

It’s also a gold rush for the rapidly growing number of pharma and medical companies, gender clinics, hospitals and physicians that are providing the plethora of ‘gender-affirming’ drugs, surgeries and other treatments. (You can read my 2020 article about this; and there are many other articles that follow the money such as this one and this one by Jennifer Bilek.)

That leads, in turn, to more funding of medical-transition studies by pharmaceutical companies and other organizations that are gender ideologues. And this means an increasingly large majority of research results and treatment guidelines will align with their agenda. As most people know, Big Pharma, for example, has had an extremely cozy relationship with academia and regulatory bodies like Health Canada for decades.

So it’s no surprise that many politicians also are jumping aboard the glittery transgender bandwagon. In Canada that includes the federal Liberals, New Democrats and Greens. They’re gunning to pass Bill C-6, which if voted into law will make it a criminal offense to even just suggest to a youth that she or he pause before medically transitioning. The bill deems this to be ‘conversion therapy,’ painting it with the same brush as programs designed to try to make gays or lesbians go straight.

This would take away the very few remaining opportunities for professionals and parents to help kids deal with the psychological and psychiatric problems (and/or internalized homophobia) that often accompany the feeling of being betrayed by one’s body. It also removes the opportunity for kids to wait, without medical intervention, and see if they return to being comfortable with their bodies in the ensuing months and years, as the vast majority of youth do.

Conservative Party of Canada leader Erin O’Toole joined the majority of members of the House of Commons in voting for Bill C-6 at both opportunities, in October 2020 and June 2021.

That’s why Elston is endorsing People’s Party of Canada candidates for the September 20 federal general election. Elston is a one-issue voter, and Maxime Bernier is the only federal-party leader who is publicly gender critical.

Elston, along with the many other individuals and groups that are pushing back against the gender-ideology tidal wave, is hoping that Canadian politicians and clinicians will come to their senses and follow the lead of countries like Sweden and Finland.

Just over a year ago, Finland prioritized psychosocial support and psychiatric care for people presenting with gender dysphoria. The country also now has strict controls on the use of puberty blockers followed by hormones for treating these individuals.

And in May 2021 the high-profile Karolinska Hospital in Sweden -- and some other medical centres in that country -- prohibited the prescribing of puberty blockers and cross-sex hormones until gender-dysphoric boys and girls reach age 16. At the same time they also switched to requiring measures such as careful patient assessment before prescribing for those between the ages of 16 and 18.

These policy shifts were precipitated to a significant degree by a judicial review in England. In their December 2020 decision two judges determined that children younger than 16 are not capable of giving informed consent for taking puberty blockers. The case centred on the country’s largest and oldest gender identity clinic, the Tavistock. Staff there had been pushing kids as young as 10 into medical transitioning despite their being too young to assess the consequences. The landmark decision is clearly written and worth reading.

Through all of these ups and downs in what’s likely one of the most high-stakes and divisive social, medical and political debate in decades – I’d say it’s right up there in importance with Covid -- Elston usually seems patient and reasonable. He also posts many good tweets.

But sometimes he crosses lines, in my opinion. A recent example is when he tweeted on Aug. 22 that a young man who agrees with his message is “a bona fide man. Not some woke bro.” And also on Aug. 22, in a retweet of a post about a 19-year-old who signed up to fight in WWI, Elston commented, “When men were men.”

A man/male is a man/male, whether or not he’s woke and doesn’t want to fight in wars. [Don’t get me started about the geopolitical and financial machinations that are the hidden underpinnings of the vast majority of conflicts.]

So it’s perhaps not surprising that Elston’s tangled with some of the women and women’s groups that are on the front lines of fighting trans rights run amok. Because some, such as Meghan Murphy, believe only females should be in the front lines of this battle. That sharply contrasts with Elston’s viewpoint. [This sentence edited Aug. 25]

(I too have seen first-hand the ‘you’re not one of us’ attitude, and the anti-male stance, of some of the gender-critical women and women’s groups.)

I interviewed Chris earlier this month in Toronto on Woodbine Beach – where, with billboards on board, he spent a few hours talking to people on his last stop of his trek across Eastern Canada. He’s easy to talk to – he’s got lots of facts at his fingertips.

Elston also sometimes gives away some copies of the book Irreversible Damage: The Transgender Craze Seducing Our Daughters.

(I’ve read it. It’s full of important information, well-written turns of phrase and astounding quotes. This is one of those quotes [on page 75]: a fifth-grade teacher saying, regarding parents objecting to teachers not informing them when their child has switched gender identity at school, that “their parental rights ended when those children were enrolled in public school.” The book is marred, however, by the author, politically Conservative journalist Abigail Shrier, taking gratuitous swipes at ‘anti-vaxxers’ [on page 64] and at the many individuals who have first- or second-hand experience with the fact that people who were sexually abused as children sometimes can recover their repressed memories of that abuse [for example in page XXV of the Foreword and again on page 45].)

“The materials that are taught to kids [in school] literally state that the toys a child plays with is one of the determining factors when figuring out [the child’s] gender identity. So when a girl plays with toy trucks does that mean she’s a boy? You say this to anyone on the street and they’ll all say, ‘No, of course not.’ But this is what’s in the materials,” Elston told me that sunny Sunday afternoon. “What they don’t even realize [is] that they’re enforcing stereotypes to such a strong degree that it’s pushing kids to medically transition and sterilize themselves.”